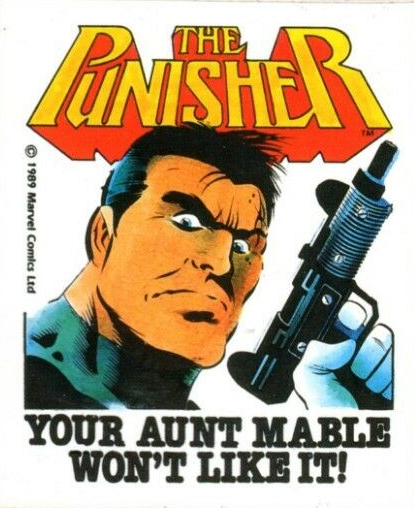 From Opening Shots:
Everybody hates being used. It makes you angry, annoyed, bitter. But then again, most people aren’t armed with an Uzi 9 millimetre. The Punisher is and he’s been used by The Trust — numerous powerful citizens banded together to stop crime. They got him to start a gang war that has killed more innocents than criminals. That’s not The Punisher’s way and he’s now determined to stop the fighting. However, The Trust are using an army of brainwashed parodies of The Punisher to perpetuate the war. Determined to end it, Punisher goes for the throat — Alaric, the head of The Trust. But having blasted his way into Alaric’s HQ, he finds it better protected than he suspected and winds up in a sealed room filled with gas …